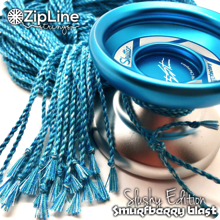 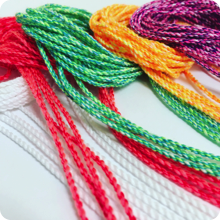 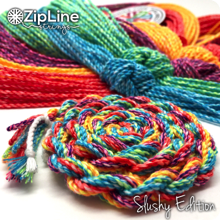 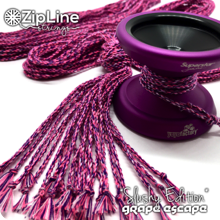 The *Slushy Edition* is where it all began for us. The original focus was to make only three unique colorways that stood out and had fun names. Somewhere throughout the process we got the idea to use the names of the slushy drinks, which were used to power 'The Slushious', in the movie 'Home'. It's one of our family's favorite movies, and we just thought it was a fun idea. The goal was that each yoyo string needed to be uniquely composed of three thread colors, which when combined, would appear as one bright base color while in motion, 'Busta Lime, Grape Escape, or Tangerine Twist'. After about a month into perfecting the color blends, I discovered another cool colorway that I wanted to add to the set, 'Blood Orange'. Then, it was a matter of completing the set in order to offer a 5 pack. White seemed an obvious go-to color, but we set out to do it in a way that would allow the string to perform similarly across all three editions. That being said, 'Snow White' is also a multi-thread type, blended string - using a very similar "Core Thread Blend." The primary difference in performance is that due to the absence of thread dye, it can be slightly less weighted.

All the strings in the *Slushy Edition* category are composed of our unique ZipLine recipe of blended thread types. The primary highlight of ZipLine Strings, and what makes them so special, is our ‘Core Thread Blend’, which helps our strings to be a bit more unique in a way of extended performance. This blend also improves our strings ability to perform solid - air cutting whips, and slacks that continue to stay wide open, even after hours of play.